Keep Those Things Away From Me - Novel 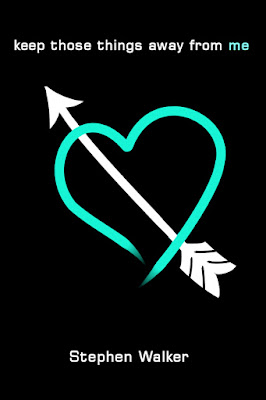 Teena Rama's determined to get married. Danny Yates is determined to stop her. It can only lead to a series of events that endanger the survival of the whole human race.

One chest's battle with bureaucracy.

One man's battle with mirrors.

A fashion agent determined to get her woman.

A jungle lord who hunts the deadliest prey of all.

A megalomaniac who can only be accessed via a cancelled bus service.

And a man who'll solve any problem for a fiver.

If you can predict how this novel ends, I fear for you.

Available from Amazon UK, Amazon.Com and all other worldwide branches of that organisation.
Posted by Steve W. 4 comments:

Email ThisBlogThis!Share to TwitterShare to FacebookShare to Pinterest
Labels: Danny Yates, Keep Those Things Away From Me, Kindle, Novels, Teena Rama

A Gockle of Fear - Sample. 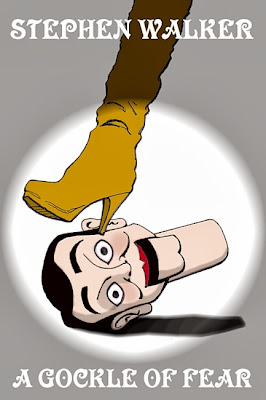 In Liz Sanford's latest adventure, the nation's official occult investigator finds herself up against a menace that threatens the government itself, as the true power in this land finds himself a victim of the least likely crime ever.

How do one of the nation's least loved entertainers and the, 'Most evil woods in Britain,' fit into all this?

There's only one way to find out:

Friday afternoon, Lou Ferman dragged Liz Sanford, by the wrist, down the aisle of a local cinema. She wouldn't have minded but he'd not even bought her an ice cream.
Under his other arm was a locked suitcase he was holding as though his life depended on it. As far as she could make out, he'd just got back from a, 'Vital, life or death meeting in London that could change the whole future of mankind we know it.'
God alone knew what he'd meant by that.
But God alone knew what he meant by most of the things he said in life. Lou Ferman was her boss - and a bigger idiot you could never hope to find.
Liz Sanford was this nation's official occult investigator. She worked for the government. And it seemed to her like, in eighteen months in this job, the twenty six year old had never known anything that resembled a normal conversation.
Reaching a middle row, he dragged her along it, pulled down a central seat, pushed her down into it, claimed the one next to her, looked around as if in fear of snipers then rested the suitcase on its side on his lap. He whispered, 'Liz Sanford, you must never tell anyone what I'm about to tell you.'
'You do know we have an office?'
'And?'
'You couldn't tell me this there?'
'Might be bugged,' he said.
'What?' she said. 'So you've brought me to a cinema to tell me this secret that no one must ever know? The one place that's guaranteed to be full of people?'
'And is it full of people?'
'I admit it's currently empty. But there was no way you could have known that before we got here and there's no way you can guarantee it's going to stay empty.'
'Look at the screen' he said. 'What strikes you about the film they're showing?'
She looked at the screen. And, after a few moments, she concluded. 'It's in Danish.'
'A foreign language film being shown in Sheffield, what are the chances there's going to be anyone in the cinema?'
'Sheffield's a cosmopolitan place, filled with people of immense cultural sophistication,' she said.
'Says who?'
'The council. In its publicity handouts.'
He looked at her like she had a screw loose.
And then he said it. 'Who runs the country?'
'The Prime Minister,' she said.
'Tsk! Betty Betty Betty.'
'Don't call me Betty.'
'Has no one ever told you the Prime Minister's a mere flunky, a fop and a frippery? This, however, is your lucky day. Why? Because you are about to meet the true power behind the throne.' And, with that, he propped the suitcase vertically on the armrest between them and flipped up the case's latches.
He let its lid fall open.
Its contents tumbled out onto her lap.
And Lou Ferman said, 'Liz Sanford, meet the man with his finger on the nuclear button.'
*
'Well?' said Lou. 'What do you think?'
Liz gazed down at the thing that had landed on her lap. She said, 'It's a ventriloquist's dummy.'
'Correction,' said Lou. 'It's not a ventriloquist’s dummy. It's the ventriloquist's dummy. Liz Sanford, meet Mr Potatoes.'
'And this thing has its finger on the nuclear button?'
'It has its finger on every button that matters in this land.'
She lifted the thing up, letting it dangle, by one arm, from her hand. 'Have you finally gone completely and totally mental?' She asked Lou.
'It's not me that's mental. It's the Prime Minister. You may not know it but, for the last three years, fair Albion has been run by this, an evil ventriloquist's dummy that sits on the Prime Minister's arm in Cabinet meetings and tells him what to do. He can make no decision without it.'
'Are you making this up?'
'You've seen the Prime Minister. You tell me. Do you think he's capable of running a country?'
She had to admit he had a point.
Lou said, 'All through his career, Mr Potatoes has guided him. From Eton to Oxford to Downing Street. Saying things to him. Things too terrible for him to contemplate. There's only one problem.'
'Which is?'
'Last night, someone stole its evil.'
'And this is bad because?'
'Without that evil, it's just a floppy collection of blocks of wood. That means that, right now, there's no one running Britain. That means we're in deep doo-doo. That means, Liz Sanford, that you have to get that dummy its evil back.'
*
'Let me get this straight,' she said. 'You want me to get a dummy its evil back so it can continue running the country?'
'That's right.'
Liz and Lou were in the van, her driving. Heading back to the office, she turned on to St Mary's Road.
She said, 'Lou. Look at me.'
He did.
She said, 'What's my job?'
He said, 'You're this nation's Numero Uno occult investigator.'
'And what does that involve?'
'It involves keeping Britain safe from occult menace.'
'Then why the hell would I help ensure that it's run by an evil dummy?'
'Because, without it, this land'll be thrown into confusion and chaos, with a total blithering idiot in charge. Also, if you don't, that blithering idiot'll sack us and replace us with someone who will do it. Those people won't be as good at their jobs as we are – because they'll have been appointed by an idiot - and we'll all be doomed. Liz Sanford, more than ever, for the good of us all, you have a duty to make sure that evil triumphs.'

You can download the rest of A Gockle of Fear from:
Amazon.Com, Amazon UK and Smashwords.
Posted by Steve W. No comments: 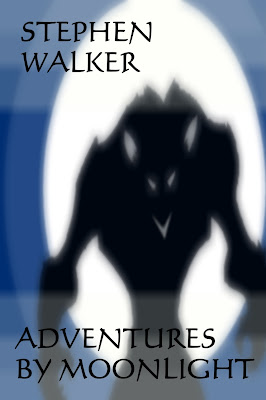 Hooray! Adventures By Moonlight is my new collection that gathers together all the short stories I published in 2011 and 2012. It also features a specially written story called Adventures In The Moonlight, which I like to think of as the tale that Robert E Howard never dared tell.

That means it's packed with 71,000 words of supernatural doings and occurrences. Thrill to the adventures of occult investigator Liz Sanford as she battles with the forces of darkness - and with her own workmates. See a Victorian super-sleuth who refuses to follow the script. Find out what happens when a metaphorical being loses her lucky hand. All this and a whole lot more besides.

You can download Adventures By Moonlight from:
Amazon.Com, Amazon UK and all other good branches of Amazon.
Posted by Steve W. No comments:

Main blog header image: Moon at its Fullest a Few Minutes Before the Lunar Eclipse of 20 Feb 2008 by Thom Rains [CC-BY-3.0], via Wikimedia Commons.

From the same typewriter:

Have You Seen This Man?